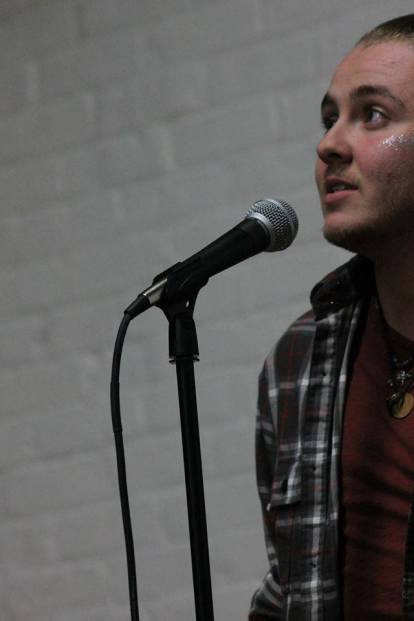 Robbie Dunning is a poet, performer, artist and educator who currently resides in Northampton, MA. Originally hailing from rural Virginia, they spent much of their youth singing to the cows in nearby fields and writing very telling science fiction stories about shirtless men. Robbie has represented Northampton Poetry at IWPS 2016 and a member of the 2015, 2016, & 2017 Northampton Slam teams. They exceed at traveling long distances in order to experience lots of feelings in a short period of time. Their poems can be found in the Spring 2016 issue of Voicemail Poems, the SlamChop Podcast, The No-No Project CD Volume 1, and in a variety of videos across the internet. Robbie was prestigiously named “That Person Who Changed My Entire Worldview” by Someone’s Dad At A Poetry Slam One Time, and holds a Bachelor of the Arts in the Study of Women and Gender from Smith College. They would love to hear about your feelings and/or adorable pet / child / hobby.

Slam following the open is any topic, just come to kick it in the pants =)

Sign up List goes up at right before the show starts! Open mic starts the show at 8pm.

NO COVER but we do have a 5$ suggested donation however, we turn no one away!

COME EARLY STAY LATE! Order drink (if of proper age with proper ID), meet people, catch up with people you have already met and EVERYTHING in between! (And please DON’T forget to tip your servers! <6)